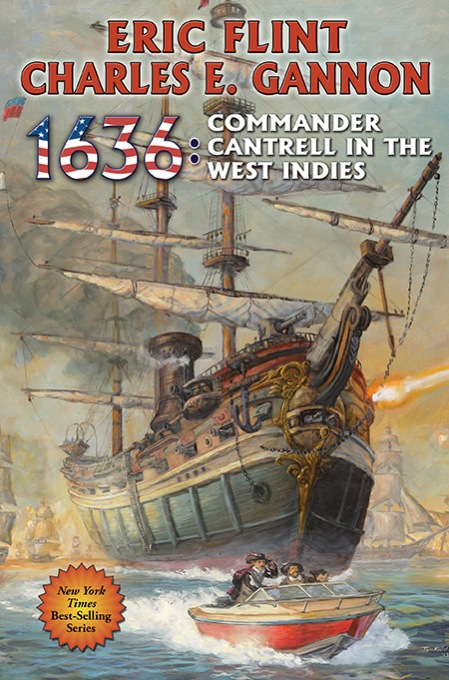 This scene doesn’t happen, but doesn’t it look nice?

My review has been delayed by other distractions, but I read most of 1636: Commander Cantrell in the West Indies before it actually came out.  You see, I’m infatuated with the 1632 universe.  I think that’s at least in part because the series offers a far more optimistic take on the world than most of the other fiction that I read.  If you already know that you don’t like the series, I doubt this book will change your mind… but if you do like them, you’ll want to take a look.  I’m not totally sold on it, and yet I still love it.

What do I mean by that?  Well, this book is a clear sequel to the Baltic War storyline, but it also incorporates at least two other storylines into the mix, with other elements thrown in from the rich milieu which has developed in the rest of the 163X stories.  It’s clearly intended to start a new set of storylines, several of which seem like they deserve their own books, or at least their own short stories.  I can see why they tried to fit so much into this book, but I feel like they ended up trying for too much and then ended up without quite enough to satisfy me with each of the individual stories.

But maybe the piecemeal way in which I read the book has done it a disservice.  I got early partial copies as soon as they became available and, like the literary glutton that I am, devoured each morsel as quickly as I could.  Like I said, it’s an infatuation.  While I doubt I’ll be able to restrain myself from reading new 163X books as fast as I can, I resolve to start over from the beginning next time once the whole book becomes available.  I’ll probably re-read 1636: Commander Cantrell in the West Indies some time soon to see just how much of my impressions came from the disjointed nature of my reading.

Now then, how about my thoughts on the material itself?

First of all, the book has a number of characters that I rather like and whom I wanted to see again.  The titular Eddie Cantrell and his wife Anne Catherine are given a sizable chunk of the story to play with (though I wish Anne Catherine had more chance to shine).  I was also pleased to see more of the Wild Geese show up, which I’d expected due to Gannon’s presence as one of the writers.  I’m not sure whether the other characters who were introduced had been given more background in the various Grantville Gazettes, since I mostly haven’t read those, but there were certainly people present who I thought were interesting but who seemed like they were only very briefly “on screen.”

That segues nicely to the twin topics of sequel bloat and story fragment oversaturation.  What the hell is story fragment oversaturation, you ask?  Why, it’s a phrase that I just made up, used to describe the problem that happens when you try to cram too many separate storylines into one book without fully exploring many of them, while simultaneously hinting that you’ll show us more interesting stuff about them in the near future.  Done brilliantly, it comes off as a witty way of teasing the reader with all the possibilities that could grow out of a single story (and doesn’t merit the term “oversaturation,” a word that my spellchecker appears to hate).  But when you try to put too many sub-stories in a piece, promise more from them, and don’t actually tell us anything more, I start making up fancy terms to describe what you’re doing that I don’t like.  Case in point, there were a number of characters who showed up for two or perhaps three short chapters at most, who felt like they were supposed to be important but never got more focus.  I readily admit that it’s a matter of taste; others may have a different experience of the fragments.  But that doesn’t really solve my problem.  Even the pieces that felt like the main storyline didn’t get nearly as far as I would have liked, but I’m more willing to put up with that based on the facts that a) I know writing is hard and time-consuming, and b) I know I’m unreasonably greedy when it comes to stories that I enjoy.  Yes, I did enjoy this story.

So how about that sequel bloat?  This is another term that I’ve made up to describe things I don’t especially like: in this case, it refers to the extra background exposition that is required to bring people up to date with wherever you are in the series, generally delivered in-character in a transparently contrived fashion as one character explains X, Y, and Z to someone else in exactly as much detail as the reader needs to know what happened in the previous books.  Sometimes it works really well and I don’t call it sequel bloat (see Scalzi‘s Old Man’s War series for an example of good background exposition that doesn’t feel too excessively contrived).  But at other times it’s almost uncomfortably noticeable and leaves me simultaneously bored and amused.  It gives me a moment of disconnect from the characters, where I feel hyperaware of the fact that I am interacting with a large story through the relatively clunky interface of words on a page.  I’ve grown accustomed to a certain amount of sequel bloat in the 163X series, and every so often I appreciate it; the series is really big after all, and keeping all the various stories in mind and remembering which happened when and how they relate to each other is daunting.  But this book had several moments of obvious sequel bloat, compounded by the presence of some fairly obvious exposition.  Harkening back to an earlier point, I’m not sure how much my awareness of this was compounded by reading the story in widely spaced compulsive sprints… but I’m pretty sure this was actually present.

Ok, look, all of that sounded pretty negative.  And that negativity doesn’t do justice to my experience of reading the book.  But here I run into a problem, because trying to explain why I liked the book is like trying to explain why I like food.  The book tastes just the way I wanted it to, it has a suitably interesting mouthfeel, and it goes well with my favorite beers.  This is not a crowning achievement of staggering literary merit, it’s a delicious mac & cheese ensemble that reminds me why I like home-cooking.  Could it be better?  Yes.  Am I happy settling in with it for a late night binge?  Very yes.  Some day I’ll review 1632, the first book in the series, and I’ll try to explain how books are like easily munched snack food.

As a final note, Flint and Gannon did an excellent job of ending the book when it needed to end, not when I wanted it to end.  I was hoping for another forty chapters or something, maybe another book or two, but I’m pretty sure they made the right choice.  Better yet, my sleep schedule has benefited from their choice.  So while this isn’t my favorite book in the series, I eagerly await the next installments in the new storylines which it has spawned, because dammit I want to find out what happens.  I think I’ll console myself with rummaging through the vast piles of Granville Gazettes for choice tidbits while I dream of what may come.

One response to “1636: Commander Cantrell in the West Indies, by Eric Flint and Charles Gannon”