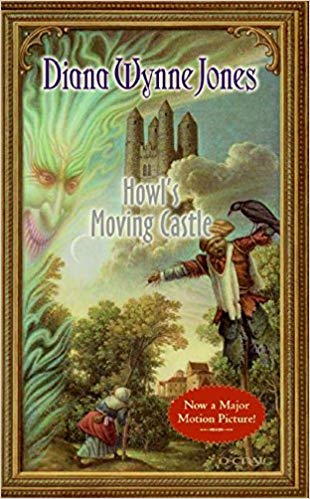 Howl’s Moving Castle is an excellent book. I’m indebted to my friend for recommending it to me; I knew the book existed, and I already loved the Miyazaki film, but it was her mention of it that finally pushed me over the edge.

Now that I’ve read it, I have to say that Diana Wynne Jones gets away with things in this book that I doubt most people could do these days. She pulls in odd setting elements that *almost* feel inconsistent, or creates fixtures of Sophie’s world that feel just slightly out of place to me (and more like our own world) without ever bothering to justify them or contextualize them. Sometimes it’s too wacky to believe.

Yet she makes all that work.

In part, I think she makes those things work *because* she doesn’t bother with justifying them. In much the same way that fables do, she treats as perfectly normal those elements that read to me as being slightly askew. This is aided by Sophie’s genre-savvy beliefs about her own position in her family’s story. Heck, it’s cemented by the story’s first two sentences:

“In the land of Ingary, where such things as seven-league boots and cloaks of invisibility really exist, it is quite a misfortune to be born the eldest of three. Everyone knows you are the one who will fail first, and worst, if the three of you set out to seek your fortunes.”

The fact that everyone is familiar with how fairy tales work, and wholeheartedly expects their underlying logic to apply to Sophie’s life, tells us from the outset that we are reading a fairy tale… or something close to it. And a fairy tale doesn’t need to justify anything it doesn’t care to, so why should this book?

Actually, let’s go back to that genre-savvy preoccupation with birth order for a moment. This is such a good example of Diana Wynne Jones making a brief thought do so much work, and I want to celebrate it. This, and the paragraph that follows, drive home everything we need to know about what kind of world this is. It’s not simply that Sophie (like everyone else) knows how fairy tales work, it’s that Sophie believes that those fairy tale rules apply to her… even if Sophie’s actual circumstances call those rules into question in small but vital ways.

And that’s another important thing that Jones does early on while she’s still establishing everything: even as she sets out the expectations that we have, she erodes them and calls our expectations into question. If we’re paying attention as we read, we’ll know that things are not quite as simple as Sophie might think. The fact that other characters in the story tell Sophie this explicitly, many many times, helps a bit—even if Sophie doesn’t believe any of it for a long time. And the fact that these slight but fundamental misunderstandings about the world are foundational to Sophie’s character arc only makes everything better. I don’t usually find stories about the transformative power of self-image and self-knowledge.

Honestly, this is beautiful work.

The multi-layered genre-savviness shown here, together with the possibility for misleading knowledge about your own life course, feels very reminiscent of Dark Lord of Derkholm in some ways. I love seeing the similarities. I would not be surprised if some of those ideas percolated in Jones’ head for the next decade or so that it took for Derkholm to come out.

I’m not even taking time to address the romantic subplots, or the gender roles that cry out for discussion, or even the fact that this book unexpectedly calls attention to the exploitation of labor. Nor am I talking about my copy’s short interview with Jones’ in the afterword, in which she talks about how many young girls told her they wanted to marry Howl and how bad a person she thought Howl would be to marry. Nor am I talking about *SPOILERS* the odd realignment of my perception of power dynamics towards the end of the book, as Sophie comes to realize that everyone else has seen her as a very powerful magic user the entire time. *END SPOILERS*

Look, there’s so much here that deserves to be read. It’s definitely a book worth reading with a critical eye—it’s such a rich vein of worthwhile discussion material, especially in the context of other romance stories from its era (like Margaret Mahy’s The Changeover), that I think you’d be missing out if you passed it by.

And, as my friend said, Jones “does a good job at making a story which at its essence is a girl who gives a boy his heart something that isn’t that terrible at all and is actually very good.”

So yes. I certainly do recommend this one. And yes, it’s definitely better than the movie.

Also, you should probably read some other Diana Wynne Jones.

One response to “Howl’s Moving Castle, by Diana Wynne Jones”