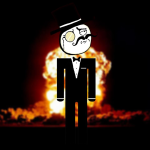 Those who know me will know of my love for steampunk. So are many others; steampunk has been a bit of a buzzword in recent years. But what exactly IS steampunk?

I feel defining cyberpunk is a necessary first step to explain how and why my use of the word steampunk may differ from common use. Cyberpunk, is a subgenre of futuristic science fiction, as characterized by high technology (cyber-netics) but low lives (-punk). It envisions a (generally) dystopian future, generally with a government which has lost all power to a number of faceless corporations, which rule the world through economic brutality and their own private militaries. Sometimes fascism or other totalitarian governments are present as well, although I have seen that less often. Common tech elements include things cybernetics, and an ‘internet’ to which all of humanity is directly linked. However, any futuristic world which has a large ‘low-life’ population would be acceptable for cyberpunk.

Cyberpunk (again, generally) shows the dystopian underbelly of a futuristic society, and does not flinch. As well, there is a sense of futility in the genre. The protagonists’ actions rarely change anything, and often, despite having fought off their own temporary problems, the world remains largely unchanged by the events of the novel. It is for this reason that I would consider categorizing The Matrix (or at least a historical presentation of the Matrix up to the trilogy) as a cyberpunk universe, as the previous incarnations of ‘the one’ had little effect on the world, only serving to reset it once again. On the other hand, The Matrix clearly exhibits qualities of the opera genre, a genre I consider to be opposed to the punk genre. In the opera genre, we are shown the world through the eyes of a few select characters who will change the world; it posits that men (and women) are capable of great deeds, often that extend well beyond human capabilities. This is not to say that the opera genre requires superhuman powers, it simply requires that individuals have a greater impact on society than we typically deem likely. Take Star Wars, for example: it is a space opera because, while a rebellion has many elements, and there are millions of workers behind the scenes, the movie portrays the rebellion as resting on just a few people.

This terminology is really only used in respect to space opera, but I would have it be extended to other genres. For example, I see The Matrix as a cyber opera, much the same as Star Wars is a space opera. And thus I define -punk as follows – dealing with the underbelly, the oppressed and the downtrodden, and the hidden secrets of a society, with a general sense of futility in that the struggles of the oppressed and downtrodden are rarely romanticized rebellion, but survival against the forces against them. In Neuromancer, for example, Case’s main goal is his survival against the rather unfair and uncontrollable forces which have pushed him into his current situation, not the destruction of the system that makes this possible.

And Opera as follows – Opera deals with the romanticizing of potentially bloody affairs, and the elevation of the actions of a few heroic individuals over that of the systems supporting them. In Star Wars, for example, little mention is giving to the underbelly of the Rebellion, such as the many spies being tortured by the Empire (there is a reference to Bothan Spies dying to get the Death Star plans, but other than that…) The one sign of the economic underbelly is of a frontierland, Tatooine, complete with Western bar(Mos Eisley), raiding natives(Sand People), and mysterious traders(Jawas). And while there are legitimate concerns there, frontiers are the romanticized in American literature and culture.

And steam is connected with the Victorian/gaslight era. If you’ve never seen the genre, imagine modern technology revamped to be run with with Victorian aesthetics and functionality. Gears and Steam power everything. But this I feel is a bit circumstantial. The reason we see the Victorian era as ‘steampunk’ is historical accident. What really characterizes steampunk technology from regular science-fiction technology is this: the function of the technology can be discerned from the aesthetics. That is, if you take a computer apart, when rests within is a bunch of capacitors, inscrutable to the layman. But if you take apart a pocketwatch, you can (in general) see how it works. What really has fueled the popularity of steampunk in the everyman worldview that that sort of technology allows for.

And so I object to the usual characterization of much of steampunk work as steampunk, because in my opinion, steam opera would be a far more accurate label, or at least steampunk opera. One example would be The League of Extraordinary Gentlemen. The title itself is very operatic. It is going to be a few extraordinary gentlemen who change the world.

And so I have two or three distinctions.

Steam and Cyber pick out tech levels and aesthetic:

Punk describes the focus of the novel aiming it at the underbelly of society. The opposite is so common it hardly needs a label.

Punk and opera are not directly opposed, although they do not coexist. Snow Crash is a clear Cyber novel, and deals with the dregs of society. But it is the only book I have known to be able to name its main character ‘Hiro Protagonist’ and get away with it, and his actions fit his name well. I would label Snow Crash a Cyberpunk opera, and if pressed, I would probably do the same for The Matrix.

3 responses to “What is Steampunk?”