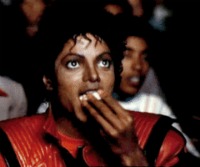 My recent reading has reminded me of a category of books that I read when I was much younger.  There was a while when I would pick up a book around noon and be done with it by the evening, often already moving on to the next one (I’m looking at you, Animorphs).  I went through such books so quickly, and those books had so little additional substance, that my mother started to call them “popcorn books.”  They were tasty, and could be consumed compulsively with little to no thought required.  They were appealing without being nutritious, and I would quickly turn to them if given the option.

I hadn’t really thought more about those books.  But recently…

END_OF_DOCUMENT_TOKEN_TO_BE_REPLACED

There’s an obvious joke or three to make here about being distressed by David Weber, but he doesn’t really deserve them.  The fact is, I continue to like his Safehold series, even if it is pretty predictable at this point.  Like I mentioned last time, Weber is serving up a recipe that is tried and true, and despite being well known and familiar it still tastes pretty good.

END_OF_DOCUMENT_TOKEN_TO_BE_REPLACED

Choice is the name of the game when it comes to Action-RPGs. Old RPGs (especially Japanese-style RPGs) didn’t have much choice, and they play a lot more like interactive movies than games. Your ‘choice’ came down basically to your character (and not ever his crucial character elements, but simply how you geared him. I say this not to impugn that style (the Final Fantasy series is one of my favorites), but only to point out how the Western RPG market diverged. If you look at earlier RPGs like Neverwinter Nights and Baldur’s Gate, not only do they flesh out character creation (instead of having a set character you can outfit, you build your character from scratch), but you get increasingly more options, via sidequests and choices of which factions to ally with. But I argue that these choices are hardly real. Why? Because they do not meaningfully impact the game. Sure, you can ally with the thieves’ guild against the mage’s guild or vice versa, but honestly:

This can be most exemplified by more sandbox RPGs, where the extra ‘freedom’ you have is to explor ethe continent doing sidequests. But ultimately, the gameplay doesn’t change all that much.

END_OF_DOCUMENT_TOKEN_TO_BE_REPLACED

“You Will Soon Die. Make Whatever Rituals Are Necessary For Your Species.”

Some of you will recognize the above picture of a predatory space squid caterpillar.  I was reminded of these most wonderful villains a few days ago by a short little news item; it surfaced here in the daily torrent of Rock Paper Shotgun articles, and I found this informative tidbit through Ars Technica.

Star Control may yet ride again.

END_OF_DOCUMENT_TOKEN_TO_BE_REPLACED

If I made a top 5 list of things I think are cool, it would look something like this:

But I don’t really think the above captures how much I like dinosaurs. My parents swear that my first real word was ‘dinosaur’, I still know the names of far-too-many dinosaur species, I can give you a compelling argument as to why the T-Rex was likely a scavenger, not a hunter, I have practiced several dinosaur noises, although I remain jealous that my phone makes this noise when texted, as I doubt I could ever be trained to replicate it, and I once nicknamed a lady I dated ‘raptor girl’ to my friends because she did a raptor impression on the internet and gave me a dinosaur head (cut out of a magazine) attached to a popsicle stick on our first date — boy was that a good move! — and we remain close friends to this day. Basically, I want to be a dinosaur when I grow up. When Jurassic Park was re-released recently… let’s just say that the number of times I saw it is shameful, or would be if I were capable of feeling shame about my love for dinosaurs. So you can imagine when I saw this trailer for Pacific Rim, I all but soiled myself. IT’S DINOSAURS FIGHTING ROBOTS! But having seen it, I must admit to a mixed reaction.

WARNING: with most media, I feel obligated to introduce a complicated system of spoiler tags. But there is no plot of which to speak in this movie. So if you fear the spoilers, don’t read on, but know that I’m judging you.

END_OF_DOCUMENT_TOKEN_TO_BE_REPLACED

In By Schism Rent Asunder, Weber continues the Safehold series that he started with Off Armageddon Reef.  He returns to his burgeoning Age of Sail adventure that pits a lovable and clearly heroic pseudo-England against a corrupt and controlling Mother Church, in what will soon become a holy war.  This recipe has been tried before, and it turns out that it tastes just fine.

END_OF_DOCUMENT_TOKEN_TO_BE_REPLACED

Just kidding.  We all know you just want to play Global Thermonuclear War.  Poor Theaterwide Biotoxic and Chemical Warfare never gets any love.  DEFCON, developed by Introversion Software, offers all the Global Thermonuclear War you could ever want.  Its spartan and elegant graphics looks just as appropriate today as they did on release in 2006, with clean glowing lines showing up beautifully on the dark background of the world; Introversion took the design aesthetics of the global tactical displays from various Cold War nuclear war thrillers, and created a game that perfectly delivers their inhuman reductionism.  It is a cold, hard, unfeeling game that leaves you feeling challenged, rewarded, and maybe a little bit broken inside as you watch the megadeaths pile up and desperately hope that you can kill a few more people than you lose.

END_OF_DOCUMENT_TOKEN_TO_BE_REPLACED

I suppose it would be more accurate that they bring guns to a knife-fight and then laugh about it.  RED is none other than Retired, Extremely Dangerous, a movie about aging covert operatives who appear to be targeted for forceful extra-retirement by some very well connected people.  Loosely inspired by Warren Ellis’ graphic novels of the same name, this movie takes those books’ themes and runs with them, delivering in a huge way.  A few names you’ll recognize own the movie’s screen with their presence: Bruce Willis, Morgan Freeman, Helen Mirren, John Malkovich, Brian Cox, Karl Urban, and Mary-Louise Parker.  They’re maybe kind of a big deal, and they totally make the movie.

END_OF_DOCUMENT_TOKEN_TO_BE_REPLACED

Those who know me will know of my love for steampunk. So are many others; steampunk has been a bit of a buzzword in recent years. But what exactly IS steampunk?

END_OF_DOCUMENT_TOKEN_TO_BE_REPLACED

Pun aside, this game is not about building bridges.  It is about being on bridges.  Spaceship bridges.  While it can be legitimately panned for its exceedingly high computer requirements (it isn’t demanding about system specs, it demands many systems), this game is a multiplayer gem of excellent quality.  I played it for the first time this weekend, and now…