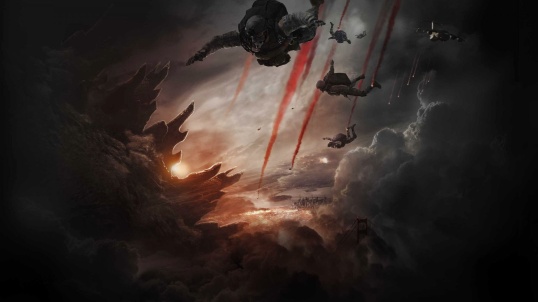 This is a wonderful summer movie.  It’s not good, it’s awesome.

It has its ups and downs: it starts on a high note with the opening credits sequence, briefly shows off Bryan Cranston, and then gives us a front row seat to people making inadvisable military choices.  After that, of course, we get to watch Godzilla, and once again everything is right with the world.  In short, it’s pretty much exactly what a Godzilla movie should be, as far as I can tell.

You’ll want to yell, you’ll want to cheer, and you may very well want to swear in awe.  You will obviously benefit from a huge screen, and I would also suggest a large group of enthusiastic people.  A little bit of alcohol probably wouldn’t hurt either.

In case you couldn’t tell, I had a great time watching Godzilla.  I also want to share some Blue Oyster Cult with you right now:

Now then.  Let’s talk about things that might spoil pieces of the movie for you.  *SPOILERS*

My goodness what a large number of people there are in this movie.  And what a large amount of time the movie spends on looking at them!  They don’t ruin the movie (and I thought the parallels made between our two protagonists, fleshy and scaly, were hilarious), but they certainly do take up a lot of time that might otherwise be spent on seeing Godzilla.  Maybe I would be singing a different song, one of boredom from excessive Godzilla-exposure, if they had cut out more of the humans and just given us heaping mountains of megalizard.  But right now what I really want to see is more Godzilla.

Speaking of seeing more Godzilla, the hints and background build-up that they did throughout the course of the opening credit sequence made me really happy.  There was no dialogue and hardly any legible text, but it conveyed perfectly the sense that Godzilla was a deep and scary secret thing that had been studied since the 1950’s.  Better yet, it gave us a reason to have Ken Watanabe’s character and a reason for there to be someone with a slightly more thoughtful response to the presence of giant scary beasts that roam the landscape hunting for radiation.

Yes, Ken Watanabe is in this movie!  I was unduly excited by this, as I rather like him.  I don’t feel like he had much of an opportunity to do anything interesting, since he and his assistant spent most of their time on screen walking dramatically through doorways on board an aircraft carrier.  They also spent the early section of the movie staring at but not interacting with now-unhinged Bryan Cranston, which left me somewhat disappointed.  I suppose that was in the movie so that we could establish that the authorities never listen to the people who know the truth until it’s too late?  It certainly seemed like that was the point they were trying to make, because after ignoring Cranston, Watanabe has the pleasure of being mostly ignored by the military.  Turnabout is fair play, or Karma sucks, or some trite comment of that sort.

Back to Bryan Cranston… I rather liked his character for most of the time that he was on screen.  He didn’t try to be stoic when his wife died early on, mostly avoiding the manpain trap, and when we see him next he’s clearly spent the last 15 years slowly going off the deep end into unhealthy obsession.  I could totally get behind that.  But there’s that scene where he totally flips his shit and starts demanding that he be told what’s going on (some of which was used in a trailer), and I just completely lost my connection to the character.  His claim that he deserves to know what is going on is constructed in such an oddly entitled fashion that I can’t feel much sympathy for it, even if I feel sympathy for him.  I don’t think it was a failure on Cranston’s part, I think it was quite simply the wrong line and wrong approach for the character.  Which were probably not things that Cranston had control of.

All of this weird entitlement reminds me: I really hope you’re not watching this movie with an eye for something other than straight white men.  There are some characters who don’t match that description, but for the most part they’re ignored.  For my part, I mostly ignored the straight white men too, because what I really wanted was Godzilla.

Except that I then found out that what I really wanted to watch was the best bus driver ever.  Seriously, there’s a brief moment in the middle of the movie where you are treated to watching a school bus driver be a total badass.  People have gotten a Medal of Honor for saving fewer people in a less stressful and dangerous situation.  My favorite part of that scene was that he’s totally not portrayed as a hero; he’s just a normal bus driver who happens to keep his eye on his goal, namely getting a school bus full of kids across a blocked and then damaged Golden Gate Bridge.  That scene was a good interlude and palate cleanser for watching more big monsters be big monsters.

Two last thoughts before I close this up.  First, monster rescue-breathing is awesome.  You’ll know it when you see it.  Second, um, prevailing winds would totally poison almost everyone in San Francisco with fallout.  There’s no way the nuke at the end of the movie should reasonably have spared SF, given that it’s “one hundred times more powerful than what we hit him with last time.”  Considering that the “last time” was strongly implied to be the Bikini Atoll bombs in 1954, as part of Operation Castle, and that one of those bombs was Castle Bravo… I don’t see how SF could really survive that blast.  Thank goodness for movie science, I suppose.

I’m totally ignoring any attempt at deciphering the meaning of Godzilla in this movie.  I’m not even sure where to start.  Watanabe’s character says something about Godzilla being a balancing force, and he sure balances the hell out of a lot of buildings and two other giant monsters.  But I’m not sure that there’s any clear coherent representation that I can see there.  Maybe you’ve got some thoughts on that instead.