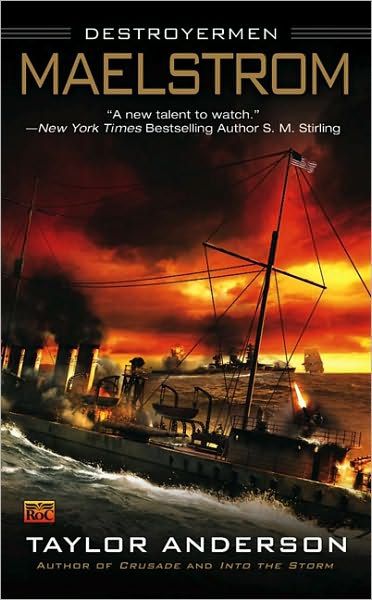 Having just finished reading Maelstrom, I’m officially downgrading this series from “potentially profoundly interesting” to “some variety of popcorn lit.”  You know, the stuff that you’ll compulsively eat without thinking too hard about it: sometimes it’s exactly what you’re looking for, but more often it’s just there and you don’t bother to stop yourself.  This series is alt-history tech-bootstrapping military fiction with a very particular set of idealized social dynamics, and as of now it doesn’t look like it will stretch beyond that.  I’m not saying that it’s bad; popcorn lit is definitionally good enough that I’ll pick it up and breeze through it simply for the pleasure of reading it, provided I’m in the right mood.  But it also hasn’t lived up to my hopes of offering more introspection on any of its various conflicts, or breaking further from its genre precedents in an interesting fashion.

I should note that it’s hard for most novels to make it past my popcorn lit category, and the category itself encompasses an almost unhelpfully wide spread of books; furthermore, I can’t pretend to be better than that myself, as I doubt any of my own short stories would qualify as anything but popcorn lit.

I won’t say that the series can’t ever be anything but popcorn lit.  Some of the future books may deliver answers to the niggling contentions I’m sharing with you here.  But thus far my hopes for what I’ll call “deeper” material have not been met.  Specifically, I want Anderson to go deeper into examining the cultural conflicts inherent between the Americans and their various allies, and I especially want him to include the perspective of Lemurians who truly don’t have specified gender roles or gender/sex expectations.  It seems like he’s introduced the Lemurians (the cat-/lemur-like creatures with whom the Americans allied in the first book) as being without specific gender roles, but when we’re treated to the perspective of a Lemurian there are a number of basic social operating assumptions that appear to be based in a society more similar to our own, one which certainly embraces a number of implicitly gender- or sex-based values.  If Anderson wants to write the human perspectives in his book with those value assumptions in place, that’s ok by me, even if I don’t like it.  But much like my love for and disappointment with the use of Drax in Guardians of the Galaxy, I find it frustrating that Anderson should introduce an ostensibly gender- and sex- blind culture and then not do them the justice of writing from a gender- and sex-blind perspective.  I have to give Taylor Anderson credit for trying, and it seems like he might not be aware of how he’s failing to deliver here, but that doesn’t make it un-frustrating.

More after the break.

It also doesn’t help that I’ve read a large number of other similar books, even accounting for the fairly novel setting; the more similar books I’ve read, the harder it is for any individual novel to stand out as more than popcorn.  For example, the appearance of crazed and ravening hordes of enemies which must be fought by a disciplined but outnumbered force just conjures up memories of Ringo’s Posleen books, or Ringo and Weber’s Empire of Man (March Upcountry, etc.).  At this point, there’s only so far you can go in that direction before I start tuning out.

Will I continue reading the series?  Quite probably.  But I’m less likely to prioritize them over other potentially interesting things that come along.  These books seem to have safely classified themselves as an oddly particular flavor that I enjoy, but as with that unfortunate Sesame Street cookie-related decision, they’ve wound up as a sometimes-snack.  And as I mentioned above, the series also has some gender-role issues that I find frustrating, making me less likely to pick up these books when offered something else that feels more positive.

Speaking of which… I much prefer the 163X series started by Eric Flint.  That series is very similar as far as genre descriptions go, except that it doesn’t always hew strictly to the structure and requirements of military fiction.  I’m not sure whether I can qualify the 163X universe as something more than popcorn lit either, but it does seem to offer a wider variety of genres and (subjectively) more interesting storylines.  Even better, as far as I’m concerned, is the fact that the 163X series seems more generally positive about allowing for more varied gender roles.  I feel like I may be belaboring that point, but, well, it’s bugged me for three books now.  1632 also doesn’t really pretend to be something that it’s not, which is charming by comparison.

With all that said, do I still think you should read the Destroyermen books?  If alt-history tech-bootstrapping military fiction is your particular cup of tea, you’ll probably love it.  Unless you’re as turned off by gender issues as I have been, in which case you’ll alternately enjoy it and be frustrated, or maybe both at the same time.  There’re definitely some wish fulfillment characters, but I gave up on complaining about those long ago since they’re such a guilty pleasure.  Enjoy the series at your own peril.  I’ll let you know if anything changes, if and when I get around to the later books.