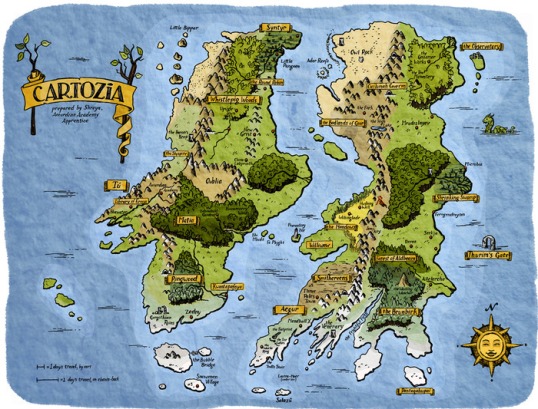 Quick disclaimer: I received my copy of the first issue as a review submission, and am friends with Lucy Bellwood, one of the excellent artists on the project.

Cartozia Tales is the collaborative creation of a group of indy cartoonists, with two issues out and another eight to come pending a successful Kickstarter project.  It explores the world of Cartozia by offering stories from all over the map… literally.  One of the central conceits of the project is that each of the artist teams will create stories from a randomly chosen location in the world of Cartozia, with the eventual goal of having every artist tell a story from every section of the world.

The world itself is filled out in promising detail on a map in the center of the first issue (like that pretty one up above).  Your initial introduction to the material is offered by a young cartographer named Shreya, who travels around the world of Cartozia mapping it out and collecting stories.  These stories are all designed to be accessible to young readers, and as such they are short, move quickly, and don’t require an extensive background vocabulary.  But leaving it at that doesn’t do full justice to the content; a number of the stories were just as deep and engaging as I would hope something aimed at an older audience to be, and the stories that didn’t quite hit that note felt like they promised to do so within the next few episodes.

The art changes from one story to the next as different artists take the reins, offering a wide variety of styles in a medium that is more often denoted by much larger uniform chunks.  I am of course quite partial to Lucy’s work, but I found several new artists that I expect to look up once I’ve finished writing this post (never mind, I couldn’t resist and already looked them up).  Simply put, I quite like this project and I’m looking forward to reading the next issue.  I highly recommend that you check it out, and contribute to their Kickstarter if you like what you see.

One response to “Cartozia Tales”