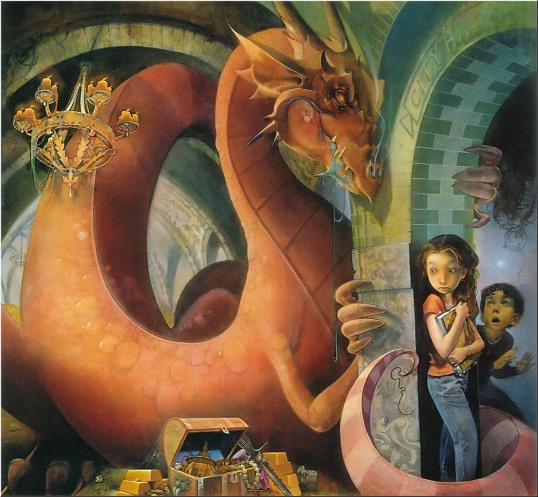 I’m more than a little bit in awe of Diane Duane.  It’s been a while since I read something of hers, and I’d forgotten how good she was at her chosen profession.  Though the genre is no longer quite so thinly populated as it was when this book first came out, I still think that Duane outdoes the young wizard competition.  When it comes to books about serious young people dealing with serious (if fantastical) problems, she’s totally on top of it.  Admittedly, I’m not the most experienced judge for this particular sub-genre, but Duane is worth reading if you like YA literature that doesn’t talk down to its readers.

So You Want To Be A Wizard follows two young newly-sworn-in wizards who are facing their very first duties, which include slowing down the entropic death of the universe and generally trying to make the world a better place.  You know, the usual.  As you might expect from a story with protagonists devoted to such expansive duties, they don’t have an easy time of things and quickly end up in way over their heads.  I admire the depth of the goals Duane sets in front of her characters, as it seems as though they never lack for things to do.  This also means that they’re facing things that are profoundly scary and difficult to deal with, which turns out to be the perfect recipe for excitement and wonderfully climactic scenes.

Without spoiling anything, I think I can safely say that this book is an excellent adventure with exceptionally mature themes for a YA story.  The themes are more cosmically oriented than those of many other YA books that I’ve seen recently, with an emphasis on the broad scope of a story that I normally associate with epics; I admire the way in which Duane manages to include an epic scope even as she keeps the story (and its narration) very personal.  It takes considerable skill to see that through, and Duane clearly has it.  If you enjoy epics, YA stories, modern fantasy, or anything similar, I expect that you’ll like this book.

Ok, so I have an odd story about my history with this book…

I must have read most of this book when I was little before putting it down and suppressing the memory, all through no fault of the author’s.  Warning: very minor spoilers follow.

Seriously, it wasn’t Duane’s fault, or at least I don’t blame her; I believe I never finished the book when I was younger because I couldn’t deal with watching people I cared about die.  I often feel very attached to book-characters that I like, and watching them die can hurt.  Heck, I even got teary reading through it this time around.  I know I got a good ways in when I was little, because I recognized large sections of it and had the oddest sense of deja vu, but I’m pretty sure I put the book away near the climax of the story when it got to be too much.

So, I’m not going to fault an author for treating her audience with respect and expecting them to be mature enough to face truth.  I had a hard time dealing with emotional distress or character death when I was young, and Duane doesn’t pull her punches.  I admire her for that, even though I suspect it may have turned me off of her series all those years ago.  I’m glad that I have the chance now to return to her books.

Better yet, even as she refuses to pull her punches when it comes to putting her characters in dangerous situations and letting people that we (I) care about die, she’s made inspiration and hope central pieces of her story world.  There are very clear moral sides, even if the boundaries between them are a little slippery sometimes, and seeing people work so hard to make the world a better place and not let each other down gives me warm fuzzies.  This is exactly the kind of fiction that I mentioned wanting more of in this piece, and in a number of ways Duane does it better than Flint (the next best competitor in my current ranking system).

Anyway, I liked this book a lot and I’m already working my way through the rest of the series.  I’ll let you know how it goes, but so far it’s still looking good.

2 responses to “So You Want To Be A Wizard, by Diane Duane”