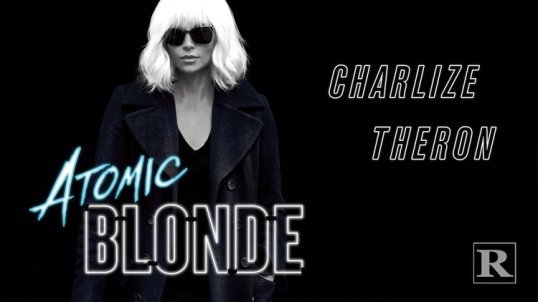 Convoluted, paranoia-inspiring, and extremely violent, Atomic Blonde feels like what a Bond film would be if the brutality of 2006’s Casino Royale met the conflicted and complicated world of *actual* spy fiction.

Actually, that’s a better description of the movie than I’d thought it would be. Atomic Blonde is full of gorgeously choreographed and grimly performed fight scenes (as one might expect from David Leitch, director of John Wick), and it is definitely not a film intended for a passive or unthinking audience. The underlying story is twisty, and nearly every person’s loyalty is deeply questionable, enough so that I spent a good portion of the movie not sure who was on which side; perfect, really, for this sort of spy movie. Not so good if you’re watching this thinking that you’ll have a neatly packaged Bond-esque film, but quite possibly more fun because of that.

I kind of wish that there’d been a little more in the way of clues for me to catch throughout the movie, or that I’d put together the ones that were there faster. If I had, I wouldn’t have been quite as confused in the end. But when I reflect on it, everything holds together, and I only have a deeper appreciation for what’s there.

I won’t give you any spoilers (apart from saying that if you can’t handle visceral uncomfortable violence, you probably shouldn’t watch this movie), but I will say that I rather liked Atomic Blonde. It wasn’t exactly what I’d expected, and I’m glad that it wasn’t. While I’d happily watch Charlize Theron play Bond in some sly, neatly packaged, thoroughly sanitized version of what current American moviegoers have come to think of as “a spy-action movie,” the gnawing distrust and complicated loyalties of Atomic Blonde deliver an excellent spy movie experience, and a better one than I’d thought I’d find. 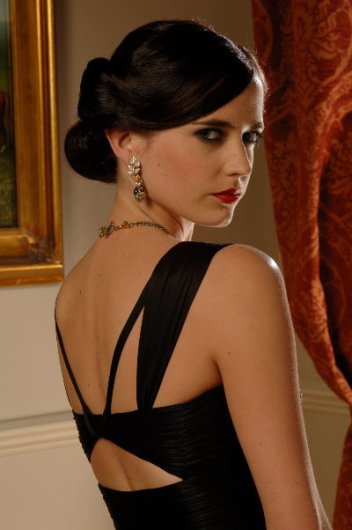 Eva Green in Casino Royale feels like the right face for this role.

This week’s Flash Fiction (as brought to you by Chuck Wendig’s weekly challenge) is a 1000 word beginning to what will eventually be a 4 part story.  The basic idea, as I understand it, is to write 1000 words and then swap sections with another author, or maybe just play musical chairs or something.  Technically I wasn’t supposed to make any sort of ending, but instincts kicked in and I started wrapping up the story before I really knew what I was doing; fortunately, I left things wide-open enough for someone to continue where I left off without too much trouble.  So, without further ado, enjoy!

It takes 31 separate steps to set up a proper party, or so Mother always said.  She spent so much time nattering on about how best to do this or that, I don’t know whether she realized that I tuned her out nearly every step of the way.  It wasn’t that I hated her, though I did a little at the time, it was just that there were always things that seemed more important for me to pay attention to.  I think she’d be pleased to know that I’ve come around these days, that I now treasure some of the things she tried so hard to drill into my head.  I’ve only really held onto the most important ones, I think, and a few of the ones that she repeated too many times for me to forget.  What, you ask, brings this to mind today?  The most important of my mother’s lessons: always have fall guys, always have alibis.  I really do think she’d be pleased by how much I’ve put that lesson to good use. END_OF_DOCUMENT_TOKEN_TO_BE_REPLACED 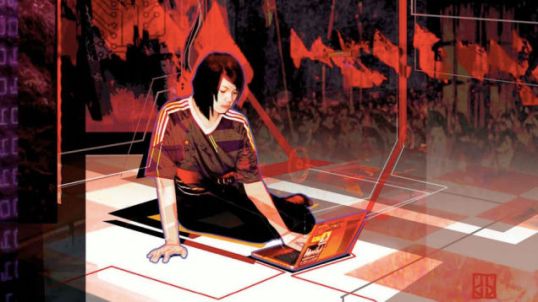 Eastern European politics (both Soviet and post-Soviet), color revolutions, spy games, long hidden family secrets, and a quiet sci-fi premise?  Sign me up.  Ken MacLeod‘s The Restoration Game gives all of that, plus a little bit more.  Maybe that’s why I liked it so much.

It’s a quick read, with an engaging and easy-to-follow female protagonist who, as the story unfolds, comes to feel like the appropriate scion of all those who’ve come before her.  I’ll explain that, I swear.  The book gets bonus points from me for having a female narrator; I’m writing a piece with a teenaged female narrator (as I’ve mentioned previously), and everything is grist for the mill.  And I should note that while I quite liked Lucy’s narration in The Restoration Game, I’d love to hear women’s opinions of the narrator’s experience and voice in this book… I don’t exactly have a good frame of reference by which to judge it.

About that scion comment: our protagonist, Lucy Stone, opens the story with a cliffhanger and no context.  It works well, catching you quickly and pulling you in, and then the entire book becomes an extended digression to give the context for that scene, only finally reaching resolution (appropriately enough) at the very end of the piece.  At the beginning, you have no idea of what Lucy has been through, what her family history is, or what she is capable of… but by the end, things fall wonderfully into place.  It’s wonderfully done, and flows smoothly from start to finish.

Ok, that wasn’t quite right.  There’s still that initial sci-fi premise, right at the very beginning of the book before Lucy ever has a chance to speak, and I bounced off it the first two times I opened the book.  It wasn’t bad, it just wasn’t what I thought I’d set out to read and wasn’t nearly as interesting to me at the very beginning as it was by the very end.  After some reflection, I think MacLeod placed the introduction of the sci-fi premise correctly; there really isn’t a better place to put it that makes more sense and doesn’t disrupt the story further.  Without that initial introduction, later elements of the book would make very little sense and feel insufficiently well signaled (here we are back at the perils and prerequisites of good foreshadowing).  MacLeod clearly set himself a difficult project, possibly without realizing that he was doing it, but I think he managed to do a good job of it.

It looks like this post isn’t even going to have a break.  The Restoration Game is fast enough and internally intricate enough that I don’t want to ruin anything for you by accident, so I won’t bother with the usual danger of discussing potential spoiler material.  Suffice to say that it’s a good book, one worth picking up for quick fun, especially if you’re interested in a jaunt through spy games and epistemological thought experiments. 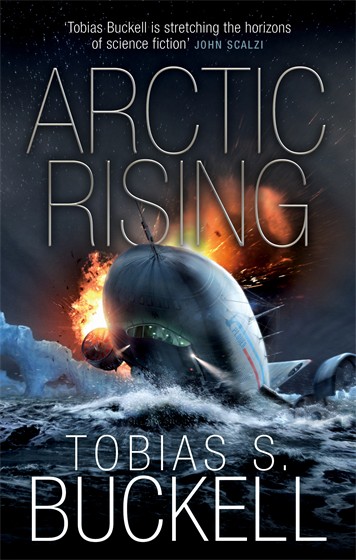 Tobias Buckell has made me very happy indeed.  I can’t decide whether I prefer Arctic Rising to Hurricane Fever, and I really liked Hurricane Fever (seriously, read my review).  It’s rare that I have the pleasure of reading a fast paced high-tension thriller set in a brilliantly developed near-future, let alone reading two of them back to back.  Buckell’s world-building is a tremendous draw for me.  It’s quality shines through in the ease with which he introduces the near-future to the reader; he keeps his obvious enthusiasm for the world he’s created tightly leashed, only revealing it in dribs and drabs, more often than not as an in-character rumination or observation that feels entirely appropriate.  Better yet, I didn’t find any gaping implausibilities.  I’ll admit that I didn’t take a fine-toothed comb to the books and their established background, but they hold together well enough to offer a compelling (and somewhat distressing) view of an imminent future.  If you want to treat yourself to a jaunt down “doesn’t this seem likely…” lane, and you want some hair-raising hijinks in the bargain, try either of these books.  If you don’t want to be spoiled for either book before you read it, be sure to read Arctic Rising first, though I did it in the opposite order and still enjoyed myself immensely.

Why did I enjoy it so much?  Well…

END_OF_DOCUMENT_TOKEN_TO_BE_REPLACED

I first heard about this book through Scalzi’s Big Idea feature on his blog.  I was captivated by Buckell‘s premise, a spy novel set in the Caribbean with a protagonist who actually lived and grew up there instead of simply going there to vacation, infiltrate, or establish a villainous lair.  It pays special attention to what it’s like to have your home relegated to the status of a playground for the wealthy, and how a pan-Caribbean federation might look in the near future.  Hurricane Fever is a fast paced delight that delivers on its premise and offers the best Bond movie I’ve read in years.  It’s a violent and active spy-thriller, and one in which the main character is more often mistaken for a member of the waitstaff than a tourist.  I found it both engaging and refreshing, and now I want to read Buckell’s other work.

Read on for more detail.  Don’t worry, I’ll protect you from undue spoilers.

END_OF_DOCUMENT_TOKEN_TO_BE_REPLACED

Ah, pseudonyms.  Adam Hall was one of the pseudonyms used by the author Elleston Trevor (which was itself not the author’s original name).  It seems entirely appropriate to me that such an excellent spy novel should come from someone who felt so compelled to shroud and change their own identity.  If you like spy stories and intrigue, or would like to try dabbling in them for the very first time, look no further.  Quiller is a far better Cold War spy than the cinematic Mr. Bond ever was, more deeply focused on the details of spycraft, practicing intimate information war as a metaphoric knife fight where you’re never truly certain as to who holds the advantage.  Drawing blood is rarely the point of the duel, and secrets are more valuable than lives.  The Quiller Memorandum, as you might have guessed, is a very exciting book.

Does the title feel achingly familiar?  Just like something that you’ve read before?  Well…