Just kidding.  We all know you just want to play Global Thermonuclear War.  Poor Theaterwide Biotoxic and Chemical Warfare never gets any love.  DEFCON, developed by Introversion Software, offers all the Global Thermonuclear War you could ever want.  Its spartan and elegant graphics looks just as appropriate today as they did on release in 2006, with clean glowing lines showing up beautifully on the dark background of the world; Introversion took the design aesthetics of the global tactical displays from various Cold War nuclear war thrillers, and created a game that perfectly delivers their inhuman reductionism.  It is a cold, hard, unfeeling game that leaves you feeling challenged, rewarded, and maybe a little bit broken inside as you watch the megadeaths pile up and desperately hope that you can kill a few more people than you lose.

The world, as a clean slate.

To be perfectly honest, I’m not sure how long I can play DEFCON before I have to take a break.  The game itself is designed to deliver on the problems of actual nuclear war (iterated prisoner’s dilemma, anyone?), while its scoring system meshes beautifully with the game design to encourage paranoia and betrayal.  The standard game settings reward you with two points for every megadeath you cause in your opponents’ territory (that’s 2 points for every 1 million deaths).  But you also lose one point for every megadeath in your own territory, meaning that under the standard scoring rules you have to make sure that you inflict at least as much damage as you receive.  The faster you can destroy your opponents’ stockpiles, and the more of their cities you can turn into glassy glowing ruins, the better off you’ll do.  Except, of course, that everyone else wants to do the same to you.

You won’t see those glassy glowing ruins, of course.  Everything is far too … sterile for that.  Just like the language that surrounds nuclear war in real life.  DEFCON shows us what monsters we really are in a remarkably restrained fashion: gently glowing balls of nuclear fire white out sections of the map as the bombs go off, their glow slowly receding until the next round of bombs and missiles hit. 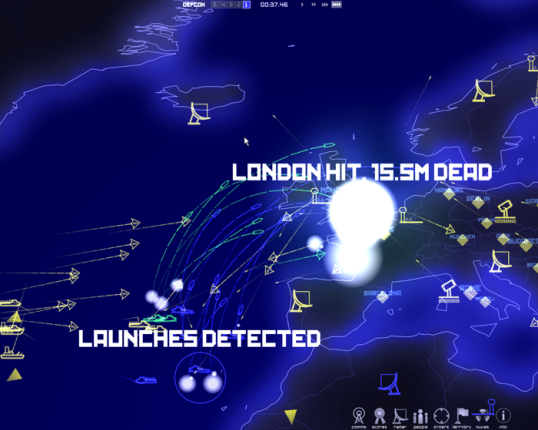 Goodbye Europe. Submarines and bombers do what WWII could not.

And then, of course, we get to see just how many people we’re killing.  And how many of our own people we’ve lost.  It is, in a word, painful.  But there’s something about it that drives you to want to do better, to see whether or not you can actually win.  And since the game is specifically designed to offer multiplayer games, you’ll be matched up against other cunning human beings who also want to win.  You will sacrifice your planes on scouting missions just to have a better idea of where to send your missiles streaming down, and you’ll try your hardest to sneak your submarine fleet in under the noses of your enemies.  You’ll have to decide how long to wait before you inundate your foes with incoming ICBMs, and you’ll start trying to outthink your opponents, wondering whether they’re actually committing to this obvious ploy or just leading you on while their bombers creep up on you from behind.

I haven’t even mentioned the sound design yet.  It, like much of the rest of the game, is subdued yet perfect.  Chilling and immersive, with plenty of quiet blips and beeps to remind you that you are directing the end of the world from your nation’s technological war-center.  The blare of the alarm as everyone’s DEFCON status ratchets down towards launch and total destruction will become a familiar rhythm.  Every so often you’ll be jarred out of your shell as you hear people coughing weakly in the background, suffering from the nukes that you’ve dropped.  It’s horrifying and extremely well done.

This game is not an easy thing to stomach, but it is exceedingly compelling and worth checking out.  Try it.  Let me know what you think.  And maybe we could play a game together if you’re up for it.