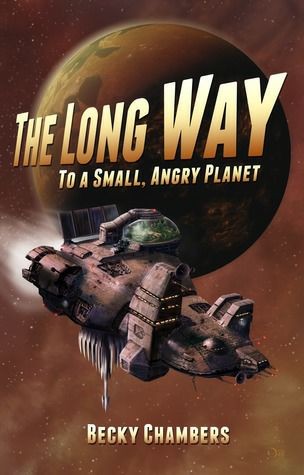 This book is a delight.

This is one of the most character-focused small-scale stories I’ve read in a while; it feels both literary and feminist in that way, delving into personal moments and paying attention to humanizing (“personizing”? Several characters are aliens after all) every character. The Long Way to a Small, Angry Planet has emotional depth that was often lacking in the science fiction I read growing up, and delivers the wanderlust and quiet tension of venturing between the stars. I love it for that.

This book is a series of well-crafted vignettes that build upon each other time and again. Subsequent layers add depth and import, making the journey of the ship and its crew as much an emotional one as a physical one. I know I’ve just described how most novels should work, but something about this story made me hyper-aware of that fact in a very good way. Let me try to explain.

Chambers knits these emotionally laden vignettes together until each element naturally follows from the previous. I know—as a writer—that this impression of natural-ness is false, that there are seams beneath the surface. And I have the damnedest time finding them here. I admire that a great deal.

This book is not a large-scope action adventure, nor is it a jarring thriller. There are moments of tension and peril, but The Long Way to a Small, Angry Planet is first and foremost a beautiful exploration of people as they grow and change together.

What a good book.

Oh I should note that there are sequels! A Closed and Common Orbit and Record of a Spaceborn Few. The first of those doesn’t deal with the characters of this book, and I understand that the second doesn’t either. I’m a little sad about that.

One response to “The Long Way to a Small, Angry Planet, by Becky Chambers”