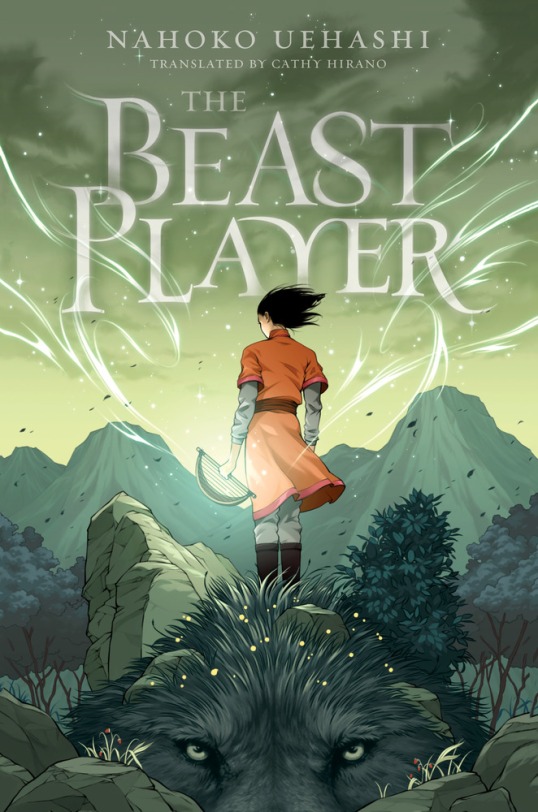 To someone well-versed in American (and more generally, Western) narrative expectations, The Beast Player is a bit of an odd duck. It is, however, a good duck.

Some of this oddness can be chalked up to the fact that this book is a translation. The version of The Beast Player that I’m writing about is Cathy Hirano’s translation of the first two books of Nahoko Uehashi’s four-part series, the same material that has been adapted into an anime. The Beast Player also exists as a manga, but I’m unsure whether that adaptation covers all four of the original novels. I also don’t know whether Hirano is currently working on a translation of the second half of Uehashi’s series.

Fortunately, this book stands on its own. When I finished it, I did not feel some gaping hole had been left in the middle of the story—and while I am curious about what might come next I don’t need another book to find a resolution. Nor do I need another book to feel a sense of completion.

Heck, I want to draw attention to that: accomplishing that kind of balance and narrative closure in the middle of a story is impressive. It’s not something that I usually see in YA genre books. I think there are a number of reasons for why I see that sense of resolution less frequently in American YA genre fiction, some of which have to do with the way in which the American publishing industry works (or doesn’t), but I appreciate the difference here. I’m not saying that I don’t want any more drag-you-screaming-into-the-next-book cliffhangers or unresolved details, because I’m a sucker for those in the middle of a series… but sometimes it’s nice to have things come to a close.

Note: your mileage here may vary. Some of my friends want everything to be wrapped up neatly with complete resolution on every front, and that’s not precisely what happens here. But if you want something that feels like the end of a story, you’ll get it. And I liked it.

There were several stumbling blocks, however.

First, and most difficult for me, the narrator of this book took getting used to. I honestly had trouble with it. The Beast Player’s narrator usually exists outside of characters’ heads, like a close third person over-the-shoulder. But sometimes it switches whose shoulder it’s following mid-scene, and sometimes it dips into someone’s head, and there’s almost never any warning when that happens. One line will be a description of someone from the outside, the next will be inside their head, and then you might be out again a few lines later and focused on someone else entirely. That was difficult for me. I don’t know where this approach comes from, but it was something that I had to get used to in order to read this book.

Less troublesome, this book doesn’t always give the narrative weight and focus to events that I’d assume needed more time and space inside the text. That was easier to accept for me than the narratorial changes. It felt more like the author was telling me explicitly that what I thought was most important was not, which was somehow easier to handle than having my point of view shift so much.

The characterizations and character tropes were the least difficult for me. While they’re a bit different from the expectations of American fiction, I easily recognized them from my exposure to anime and manga. Because I recognized them, I had that as a point of stability; even when other narrative elements felt difficult or unusual, I could fall back on my understanding of the character tropes and feel like I knew what was going on.

Speaking of characterization, I want to return to my mention of ducks.

This book does an exceedingly good job of characterizing animals as animals. I think the Cat Warriors books are only other time when fiction has so convinced me that I was seeing an animal in my mind’s eye. While I personally did not like the Cat Warriors books (I had to read them for an assignment, and I am very much not their target audience) I was deeply impressed with how well they described the body language and actions of their cats. I was similarly impressed here by how well Uehashi and Hirano describe the movements and personalities of the fantastical beasts of this book.

I love how Uehashi plays with the impossibility of truly comprehending another living being, and the constant attempts that we make to try and bridge that gap. The fact that she addresses this gap through the difficulty of interpreting an entirely alien body language is wonderful. That she then goes on to show the work necessary to understand another being, and the dangers of assuming knowledge or acting on incorrect knowledge, is also wonderful. Uehashi’s careful characterization of animals shows our attempts to connect with each other as an exacting struggle, but one which has rich rewards and personal intimacy alongside the risk and danger. It’s lovely.

So, as I was saying…

This is a good book. It’s a tad odd when measured against my narrative expectations, but no less good for that. I recommend it, especially if you’re looking for YA fantasy with a female main character, or with lots of good animals, or with some political intrigue. If you want all those things, you’re in for a special treat.