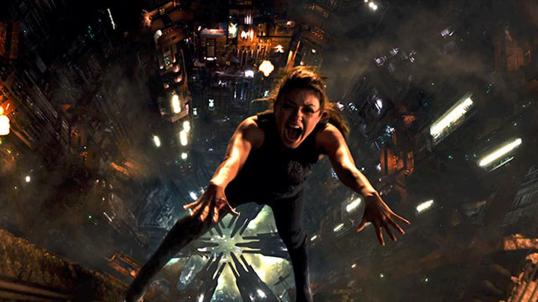 What a poorly titled movie.  Sure, one could argue that there’s an overall metaphorical upwards trajectory for Jupiter’s (Mila Kunis’) life, but over the course of the movie she spends far more time falling.  And being caught or carried by Channing Tatum (who was often agreeably shirtless).  Yet there were a few things that rose over the course of the movie: my excitement, my confusion, and my blood alcohol level.  Oh, and my voice, because I gave up on staying silent and just started talking in the movie theater.  I think the Wachowskis may be branching out into straight-to-RiffTrax movie releases.

You want to hear a few of the redeeming features of the movie?

Sean Bean doesn’t die.  Also, the movie has a hilariously recognizable cast, with many very watchable faces.  The depictions of the terrifying spacefuture (well, spacepresent) are intriguing and gorgeous, even when they’re super goofy and prominently feature terrible science.  The concept art and overall design are beautiful, fascinating, and leave the movie chock-full of eye candy.  And the comedy commentary practically writes itself, especially if you know and like Oedipus.

None of this makes up for the fact that the movie is terrible, but they’re all compelling reasons to see it on a very large screen with good sound for as little money as possible.  Preferably with enough booze to get you tipsy, because facing this movie sober seems like a terrible idea.