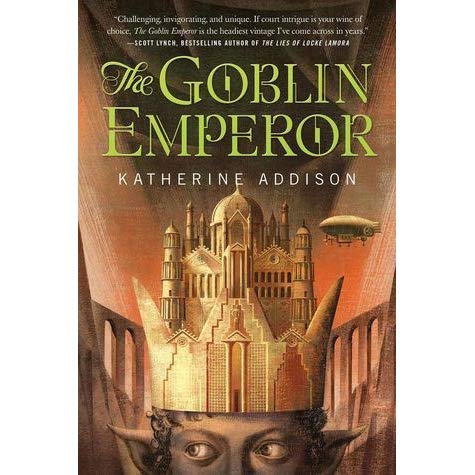 The Goblin Emperor is strangely soothing. I don’t mean that it will make you feel good the entire way through, nor that nothing bad happens; I mean that it’s touching, fun, feels real, and somehow delivers good political intrigue in a grim situation without being dark or gloomy. Also, it hooked me and kept me excited despite being a tome.

I found this book on a Tor list recommending anti-grimdark stories, and it entirely delivers. Though shelved as YA, I think everyone would like it.

You know how sometimes you don’t want a story to end? You reach the finish and sit in that lingering need to see more, stuck on the idea that surely you could get just a little more story out of the book if you squeezed it just a bit harder. That was this book for me. I wanted more, I wanted to see what came next.

But Addison timed the climax and denouement for this book extremely well: she resolved the central issues, the emotional and political struggles that swirl through the heart of the story. Then, with that resolution still in hand, she ended things; no unecessary time is spent dwelling on anything extra or outside the story. Also, no matter how much I want to read more about the good things that happen to these characters, reading about only good things would probably bore me after a while.

And, unless they launched a whole new story, I’d feel sad when things strayed from that quiet feeling of calm stability.

I have more to say. I won’t give you explicit spoilers, but bear in mind that (if you’re strongly in the anti-spoiler camp) you may glean more from my comments than you wish to know. If you want to stop here you can. You should already know by now that I recommend this book.

Anyway, you spoiler-phobes have been warned.

There’s a lot of grimdark out there. There’s an excess of stories that revel in showing us how gritty and real they are by rubbing our noses in how poorly everyone treats each other. It takes a special kind of attention, a particular exercise of will, to write political intrigue—complete with assassinations, nefarious plotting, and villains aplenty—while still clinging to an underlying optimism, and giving everyone relatable humanity.

I rarely read characters I fall in love with in political intrigue novels, people who are quite simply good. They’re usually narrative fodder, intended to show the reader how characters die. So it is an absolute joy to find that The Goblin Emperor neither ignores the dangers of trusting those who desire your power, nor casts the central character as a manipulative super-human. Instead, The Goblin Emperor allows its main character to be manipulated and suffer for his naivety, learning from his mistakes without losing his honesty and decency or being crushed beneath the novel’s narrative heel—this story doesn’t assume that to be kind one must also be stupid. It allows him to be a good person trying to do the right thing in an impossible situation, even as he struggles with the growing weight of understandable paranoia and the inability to know what choices might be the ‘right’ ones.

It helps that The Goblin Emperor doesn’t bother with irredeemable villains; even the people I came to detest still had their own reasons behind their actions. Whether obviously selfish, well-intentioned, or something else, they always felt complexly human and real.

What I’m saying, really, is that this is a good book. Katherine Addison did a good job, and made a story that I strongly recommend. It’s emotionally real, it’s sometimes grim, but it’s also hopeful. And that matters.

One response to “The Goblin Emperor, by Katherine Addison”