Somehow, despite reading hundreds of thousands of words on how to run roleplaying games since the age of twelve, I don’t clearly remember any RPG book giving me this advice:

Explicitly set expectations for your group around how you, the storyteller, will adjudicate rolls, rulings, and mechanical resolutions.

It’s totally possible that I simply glossed over this advice when I did read it. But it’s important enough advice that I’m going to devote more words to it here.

The flowchart of the “murder hobo.”

Game systems, role-playing game systems, are a set of constraints on cooperative imaginative play that are designed to facilitate making up stories together. The constraints they impose create boundaries around the kinds of stories that you can tell within those game systems. This doesn’t make “resistant play” impossible (using resistant play as one might use the term resistant reading), but any system will tend to make a particular kind of play or story experience easier to support than others.

I’ve discussed related thoughts previously, in the context of “flavor.”

But what about experience points, or character advancement?

What about the game’s systems for rewarding players?

END_OF_DOCUMENT_TOKEN_TO_BE_REPLACED

Pokemon X/Y comes out tomorrow.  So today I am going to talk about my favorite monster collecting game.  No, it’s not Pokemon.  In fact, my favorite game in the “collect, raise, and battle” genre is a spinoff of the well-known series Dragon Warrior/Dragon Quest.  The game is Dragon Warrior Monsters (DWM), and while I have not played it through as many times as I have the original Pokemon, I have loved it a great deal more, and spent more energy on it.  It is rare for me to actually write stuff down in a notebook for a game, but for DWM I found myself recording my findings in a notebook for future use.  This is due to its unique take on how you collect and battle your little monster minions, even if you raise them just like most other RPGs (yay grinding!)

The story for the first game (yes!  There are more than one!) begins with your sister getting kidnapped by a strange monster.  Immediately after another monster shows up and offers to help you get your sister back.  He takes you to another world and introduces you to a king.  Apparently there is a tournament soon, and the prize for winning is a wish.  Before you can participate you must train up and qualify, and so begins your journey (which includes other stories as well).  I am honestly terrible at plot-synopses because I don’t like to give anything at all away (I believe part of the joy of a story is going into it completely blind).  So as per usual I am going to focus my reviews on mechanics.

END_OF_DOCUMENT_TOKEN_TO_BE_REPLACED

Reading the title you may be thinking that I am going to talk about how characters evolve in a narrative in roleplaying games, but if you remember last week’s article you may note the subtle queue in my use of RPG instead of “roleplaying game.”  That’s right; today I am going to talk about different styles of stat/ability progression in RPGs along with minor discussion on the role of progression in narrative.

END_OF_DOCUMENT_TOKEN_TO_BE_REPLACED

I have written a few reviews for digital roleplaying games (RPGs), but in many cases I find the label is completely inappropriate.  When I think of a “roleplaying” game, I think of a game in which I take control and can make important narrative choices.  But most digital RPGs don’t let you make narrative choices at all.  For that reason I would say that the label of RPG has come to be associated with a mechanic which is common to most RPGs, but isn’t the attribute that makes them RPGs.  The mechanic in question is that of leveling up, and I hate it*.

END_OF_DOCUMENT_TOKEN_TO_BE_REPLACED 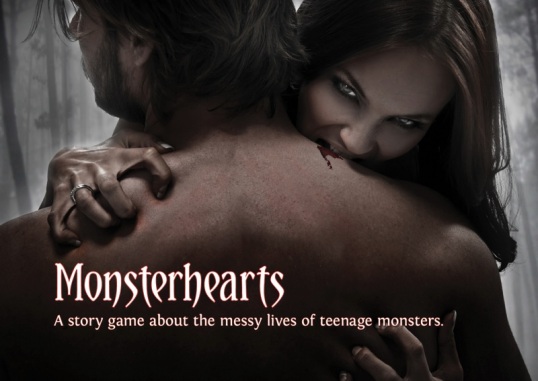 Monsterhearts sells itself as “the messy lives of teenage monsters.”  But the truth is that the monstrous nature of the PCs in any game of Monsterhearts really just serves as a reminder of the alienation, discomfort, and feeling of mislabeled or misunderstood powerlessness that gnawed at so many of us when we were teenagers.  And maybe as adults as well.  Furthermore, themes which have filled classic literature for ages rear their heads again and again in this game; you don’t have to have ever experienced any of them yourself in order to be fascinated by and indulge yourself in them.

A quick background: this is an RPG which has grown out of the Apocalypse World system created by Vincent Baker.  It takes the sparse elegance of Baker’s ruleset and applies it to a very different type of life.  Read on to find out what makes Monsterhearts different from Apocalypse World, and learn some of what makes it so dynamic and so much fun to play.

END_OF_DOCUMENT_TOKEN_TO_BE_REPLACED

First, two quotes to start us off:

“No plan survives contact with the enemy.” (paraphrased quote from Helmuth von Moltke the Elder, a man who was actually quite keen on extensive planning and who might be considered the great-grandfather of RPGs)

“The players are the enemy.” (the storyteller’s corollary to the first quote, promoted in old gaming literature and still embraced by some gamers today)

I’ve often heard these quoted, seriously or jokingly, by my RPG playing friends.  The first one I agree with: opposition is a chaotic force, and will often ruin your most carefully laid plans.  The second one I only agree with insofar as players are an inherently chaotic force.  They are other people, and will often do the unexpected.  Unfortunately, the second quote is often interpreted literally.  Players are seen as the opposition and their characters are therefore meant to be outwitted, led by the nose, and then set upon while at a disadvantage.

Worryingly enough, I most often hear these quotes spoken seriously by my friends who have not yet run many games.  With a literal interpretation, where the hell do those two quotes lead us?  If the players are the enemy, it stands to reason that everything the storyteller does is in opposition to the players.  More to the point, it sets up a clearly antagonistic relationship between the players and the storyteller in which the two sides have no reason to cooperate with each other.  It’s like they’re not actually playing a game together.

If they are playing a game together, it’s more like a strategy wargame in which all details are included solely to “get” the players.  This is, of course, where the genre originated: the first games that we would recognize as RPGs grew out of wargames, as the logical result of a progression towards smaller and smaller unit sizes.  Eventually, each player had control of only one individual instead of many units, laying the foundation for the RPG genre that we know today.  The influence of modern gaming’s military history is still visible: the habits of secrets and hostile surprises that we have come to see as part and parcel of the RPG experience come from this background of wargaming.

But even as someone who enjoys wargames, I don’t always want to play a wargame when I sit down to play an RPG.  There’s an opportunity here to explore gaming without those holdouts baked in, and some game designers have been pushing in that direction for years.  Yet if we aren’t following in the habits of our wargaming ancestors, what do we do?